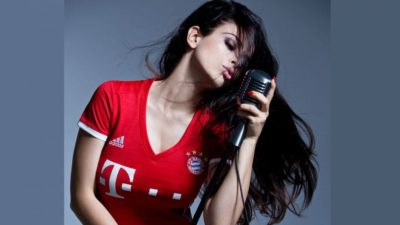 Cindy Gomez embraces an unconventional start in her music career, and this has opened the gates to all sort of opportunities. An epitome of “Success comes in Cans and not Can’ts”, we are thrilled to have her to share on her journey thus far and what lies ahead.

Ikiguide: Hi Cindy, first and foremost, a big thank you for accepting our interview!
Cindy: It’s my pleasure!

Ikiguide: Congratulations on the new single “I Got You”.  Share with us what are your plans after this release?
Cindy: Thank you! I’m working on a few musical projects, one of which is a soundtrack for a new video game and two others which I cannot mention yet but that I’m very excited for!

Ikiguide: How would you describe your journey since the release of “I Bring You Love”?
Cindy: “I Bring You Love” was a song I co-wrote with Dave Stewart which ended up being chosen to be the main theme song of Lifeball (Europe’s largest Aids charity). We performed it in Vienna to 70,000 people and gave the proceeds of the song to the charity.  Since then, it’s been a whirlwind adventure of travelling, living in various cities and countries, writing a lot of music, and meeting wonderful people. I have been writing a book which is almost complete about many of the adventures and what I’ve learned along the way that I may or may not put out.  This year, I was part of Fox International’s “Celebrity Edition of The Apartment” which was a lot of fun as well as a big challenge. I feel truly blessed!

Ikiguide: You mentioned in one of your interviews that you wish to join forces with a mandarin singer. Who do you have in mind and why?
Cindy:  It’s always been a dream of mine to record a Chinese song as I grew up listening to the Four Heavenly Kings of Cantopop – Andy Lau, Aaron Kwok, Jacky Cheung and Leon Lai.  It would be a challenge as I don’t speak Mandarin or Cantonese however I find the music to be very beautiful.

Ikiguide: You said once that since the age of 8, you knew you wanted to be a singer. How was your debut through the mobile game platform like? It isn’t the traditional debuting style for singers, is it?
Cindy: The old traditional ways are dying out and only three major record labels exist (Sony, Warner & Universal) Nowadays artists must find unique ways of breaking through in this market and I was very lucky to become an avatar for the mobile game “Dance Fabulous” as well as include 5 of my songs which launched in over 40 million Nokia handsets as it instantly introduced me to various countries around the globe that I might not have had a chance to be exposed to.

Ikiguide: What is the one thing you feel which contributed most to your breakthrough? Is there an essential trait which one must have to survive in the music industry?
Cindy: When I was asked to sing back-up vocals for Ringo Starr on Larry King Live, I met Dave Stewart backstage and he changed my life! I would say he was the catalyst that transformed my dreams into reality.  I have written so many songs with him and he connected me with Nokia and got my first record deal with Interscope and Universal Records. I am so grateful for Dave’s friendship, mentoring and support.

If you want to survive the music industry you should have a hard work ethic as its a 24/7 job, patience and perseverance.  You will most likely hear no and get rejected many times before you see success but you have to believe in yourself and keep going.  The Beatles were rejected by many record labels before they became known as one of the greatest bands in history and Katy Perry was dropped from 3 major record labels before she became a big star and the list goes on and on of celebs who were rejected at first but then rose to mega stardom.

Ikiguide: You are a singer, a songwriter, a model, a writer… that’s really an amazing list. But diversity is like a double edged sword–while it can promote you as an all-rounder, it can also dilute audience’s impression of you as a singer. How do you manage it all?
Cindy: I love to create and to me life is about moving forward, doing what you love and creating memorable moments.  I’m not concerned with how others perceive me. I follow my excitement and passion and trust that everything always works out for my highest good.

Ikiguide: Before we end this interview, can you share with us one of your favourite lyrics to encourage aspiring singer-songwriters?
Cindy: I have a song but it’s not out to the public yet and it says “If You Can Dream It, You Can Be It” because I believe the only limits we have are the ones we place on ourselves. Follow your excitement and your passion and you can never go wrong because no matter what you will have enjoyed every moment of your journey.

Ikiguide: Thank you Cindy once again and we wish you will have a blast for all your future music endeavours!

To know more about Cindy Gomez or connect with her, click here.