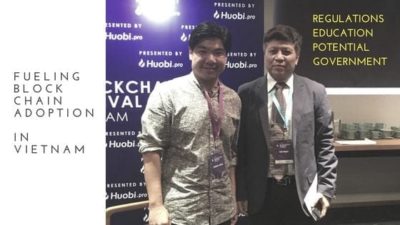 In his opening speech, Dr Dao Dinh Kha shares about creative ideas, growth, and prosperity that Blockchain could potentially bring. We went back-stage to interview Dr Dao to find out more about his opinions on adoption, and his message to the Vietnamese community.

Brief Background: Dr Dao Dinh Kha graduated in 1987 with a B.S degree in applied mathematics from State University of Chisinau (former Soviet Union). By 2005, he obtained his Dr Eng. Degrees in Information Science from Nara Institute of Science and Technology (Japan). After several roles in the Information Technology departments, he became the Director General of Department of IT, Ministry of Information and Communications.

Daniel Shen (DS): What do you find is the most impactful attribute of Blockchain?

Dr. Dao Dinh Kha (DD): Blockchain is like a new kind of technology and is very suitable for the digital economy. It helps in transparency as people can easily see how things are going.

Facts/Details: By making it possible for digital information to be distributed and not copied, blockchain technology created the backbone of a new kind of internet. Initially, it was designed for digital currency, Bitcoin, but the community is now looking for ways where it can be beneficial. Just like the internet or your car, there is no need for you to know how bitcoin works before you can use it. However, having a basic knowledge of this new technology shows that it is revolutionary.

DS: What is the role of government in the adoption of Blockchain?

Facts/Details: Thus the Vietnamese government prepares to analyze bitcoin and cryptocurrency. They may likewise provide the regulatory framework for them in the nearest future. The prime minister Nguyễn Xuân Phúc recently approved a plan to delve into these assets and also consider legalizing them. Digital currencies could be acceptable and legal sooner rather than later in Vietnam.

DS: People are getting very interested in Blockchain, what do you encourage for daily people to do to keep in touch?

DD: There are many different scenarios where people can use Blockchain. In order for the education of this technology, we must have events like this Huobi Festival. The community must know the importance and called upon to investigate. Government employees must also understand the benefit of this technology especially people who setup regulation framework to support this technology. In addition, universities should promote research in this technology.

Facts/Details: In 2014, Vietnam declared Bitcoin as illegal but has started partial legalization of smart contracts and cryptocurrencies. Based on a report by regional news services VNA, the prime minister has ordered the country’s central bank, the Ministry of Finance and the Ministry of Public Safety to study and draft a legal framework to regulate virtual currencies. The assessment process is due for completion in August 2018. The preparation of legal documents needed for the recognition of cryptocurrencies under a regulatory framework should also be finalized by the end of the year.

DS: Are there any governmental organizations that could be looking into this, and if so who are they?

DD: There are 2 elements here. The teacher and the student. The teacher has the task to research the technology to measure if it is safe and derive the kind of standards needed for Blockchain. The government will find a way to make it legal, establish clear regulation and a clear framework towards to promote usage of Blockchain to bring prosperity to the community. For students: People must have the enthusiasm to learn about this tech as it’s very important to make the future.

Facts/Details: The Ministry of Justice has been encouraged by the prime minister to collaborate with other institutions to determine how cryptocurrencies such as bitcoin can be integrated into the society. This was elaborated in a Vietnam news article.

“The PM likewise asked the Ministry of Justice to preside and also coordinate with other relevant institutions and ministries, including the State Bank of Việt Nam, Ministry of information and communications, Ministry of Finance, Ministry of Industry and Trade as well as Ministry of Public security, to scrutinize the current legal framework, provide a comprehensive assessment and also propose a suitable solutions as well as revisions in the framework to the Government.”

DS: What do you want to tell people about the adoption of Blockchain for the wider community.

DD: This technology has very promising benefits. However because its new, be smart about its applications. Every tech has benefits and constraints.

In Vietnamese, we have a proverb – the later buffalo only drink dirty water  / get no food.
Trâu chậm uống nước đục

We then spoke to the audience about their feedback on Dr. Dao’s feedback.

Trung Nguyen, who attended all 2 days of the conference was delighted. “I am very thankful that the Ministry of Justice has opened to bring Blockchain technology close to the Vietnamese people. I’m content of the possibilities that this technology could do to boost prosperity in Vietnam.”

Belinda Lim, Co-Founder of Blockchain Projects Pte Ltd in Singapore added: “Vietnam, with its brightest tech minds, is poised to harness the blockchain revolution in the region. With progressive support from the government, imagine how much good we can accelerate with blockchain. Looking forward to more events in Vietnam!”