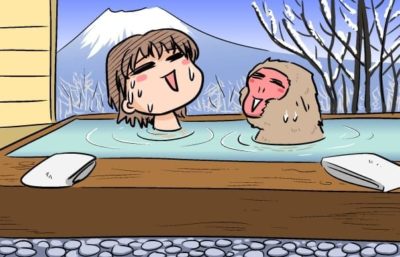 With a Facebook fan page of close to 72,000 followers, I’m sure many of our readers know about Evacomics, a comic series which depicts creator Evangeline Neo’s quirky yet strangely relatable observations between life in Singapore, Japan and America. Evangeline published her first comic book, “Eva, Kopi and Matcha” in 2014 which features the full collection of witty and light-hearted comics narrating the cultural differences between Singapore and Japan. In case you are wondering, Kopi and Matcha are Eva’s imaginary pets (Kopi is a dog & Matcha is a cat) who are also key characters in the comic book.

Ikiguide is very honoured as Evangeline took some time off her very busy schedule to answer some questions about her journey in pursuing the arts as a career, the inspiration behind “Eva, Kopi and Matcha”, advice for budding artists and more…

When did your interest in comics and drawing begin? Who or what influenced you and how did they spur you in the direction of pursuing the arts as a career?

I think my interest for drawing began when I drew a dog when I was very small and everyone praised that it looked very good. So I gained confidence and drew more and more. I also enjoyed watching cartoons a lot. I managed to enter into the Arts Elective Programme in high school and learnt how to draw better. I was also introduced to Japanese comics and fell in love with it immediately. So I started to draw 6-8 pages comics and one of them got published in a local comic magazine (now no more) when I was 15 years old. To see my own work published was an indescribable achievement so I was bent on becoming a comic artist. I did not choose to go JC although I could and chose to enter into a digital media design diploma course instead. Unfortunately, I saw my classmates draw better than me so feeling inferior, I gave up drawing comics and did 3D modelling instead (which I did better than the guys). I did not draw comics again until 10 years later when I was graduating from my art university in San Francisco. My Japanese friend encouraged me to pick up my dream again and offered to help me translate my comics into Japanese so I could submit them to Japanese publishers. Meanwhile in the same year (2007), I was also inspired by a Taiwanese comic artist “Wan Wan”, who surged to fame when her comics about her everyday life became very popular on her blog. I wanted to see if I could become like her so I setup an account on the same Taiwanese blogging platform and starting to draw webcomics.

When you decided to pursue a degree (and eventually career) in fine arts, did you face any difficulties or challenges? How did you manage to overcome them?

I was on the MDA scholarship and my parents were very supportive to cover my daily expenses so money was not a key issue. The main challenge is how to be the best and do better work each day because the school was very competitive, with people from many nationalities and all passionate about making art and fighting to get the best job in the industry. I had to work really hard to stay ahead so I can have a chance to be hired by one of the big studios there (which was my intention before thinking of pursuing comics again).

Having an expertise in both the arts and marketing seems to be an unusual combination. How did the training and insights from your MBA help you in the development of your career?

It’s an unusual combination but a good one. I think Singaporean artists have good skills and so many people can draw better than me, but we do not know how to sell. Training from a business point of view helps to set a direction on what I should draw. For example, after setting a target that my comics were for people who like Japanese culture a lot, I began to write a lot about my experiences in Japan and post photos of what I saw that might interest my target readers. I also wrote more on my blog to establish myself as the expert in this field.

Having visited Japan a few times before, I personally enjoyed the comic strips from your book “Eva, Kopi and Matcha”. How did the idea for a cross-cultural comparison between Singapore and Japan presented in comics form come about?

I was drawing webcomics for 5 years and getting no where with no publishers interested to publish my work. My Facebook likes were also very stagnant with around 600 likes (in 2012), half of which are friends whom I forced them to like. So I asked my friends on Facebook what they were interested to read from me and they said since I was in Japan, why not draw something about Japan. There were already Chinese comic artists drawing webcomics about their lives in Japan so it won’t be original for me to draw the same thing again. Since I experienced some culture shock in Japan and missed Singapore, I tried to draw a comparison of the two countries and try to think about the good side of Japan (living there and having a holiday are really two different things). Somehow the strip became very popular and for the first time, I see a lot of strangers liking and sharing my comics.

“Eva, Kopi and Matcha” is very popular and well-received not just locally but also internationally. Will we see similar published works from you in the near future?

Yes, actually I am trying to work on the second book with all new content. Problem is I haven’t got time to work on it because I was so busy marketing and selling my first book and doing commissioned jobs at the same time. I also get constant invites to give talks and receive interviews from press and some web portals. However, I have been uploading new comic strips every Monday and they will be compiled for my third book, which will include USA.

As an artist, having continual inspiration and creativity is essential but also a challenge. What keeps you going and are there any particular persons or works that continue to inspire you?

I have that artist block too so when I have a lot of ideas, I quickly enter them into my iPhone, like an idea bank, I can withdraw ideas from it anytime.I look up to Charles Schulz, artist of Peanuts and creator of Snoopy. He never fails to deliver a comic strip each day until he was too sick and could not draw anymore. His love for comics and his hardworking spirit never fails to motivate me when I’m down. I wish to draw until I couldn’t like him.

If there is one artist or author you could work with, who would it be and why?

Scott Adams, comic artist of “Dilbert“, is the only other comic artist that I know of with a MBA too. I think it will be cool if we can work something about business or management together with an Asian flavour to it.

What advice would you give to those who wish to pursue the arts as a career?

It’s not an easy career, it requires a lot of perseverance, hard work and connections. Don’t feel bad if you don’t draw well now, you may be able to find your own other style that other people also like as well.

There will be a lot of people who want to tell you what you should do, but they did not do it themselves. You have to validate if you should follow or if there is a better way. But IMO, if you do like what other people do, there will never be a breakthrough, so always think of alternate solutions to problems.

Because it takes a very long time to succeed (unless you are from a rich family or super lucky), I would suggest to work on it on a part-time basis first until you have enough portfolio, contacts and experience. For me, I drew webcomics at nights and on weekends while working and studying for 6 years before deciding to “cheong” full-time. Many people told me not to continue and I was also looked down upon because I was not famous. You need to swallow these insults and move on. When people see you being so determined and motivated, they will become inspired and want to help you too. I also recommend reading or taking some marketing classes so you can align it with your art and interest instead of blindly working on something that is not going to work no matter how long you persevere.

We would to thank Evangeline once again for taking time to do an interview with us!

Please check out her Facebook page, Evacomics and visit her blog and official page to get the latest updates about her upcoming talks and events!