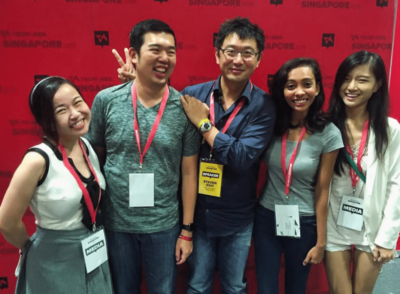 Last month, we had the huge pleasure of interviewing Steven Goh, the co-founder and CEO of Migme.

Headquartered in Singapore, Migme is an international digital media company focused on emerging markets in Southeast Asia, India and Africa. The company has a freemium business model where revenue is generated via in-app purchases. As of 2016, its monthly active users to 32 million.

Like Line, Kakao and Wechat, we are delivering premium interactions, other applications and games, other content services and also e-commerce. And this is why we recently acquired Shopdeca.

We really like Andreas Thamrin, the founder of Shopdeca. ☺ [Pictured above, next to Steven]

IKIGUIDE: Migme was actually first built up in Australia, then it went to Silicon Valley, and it came to Singapore. Why Singapore?
Steven:

We always want to be close to the countries that we are successful in. We always have more of a presence in Indonesia, as compared to anywhere else in the world.

There are only two or three countries in this region where you can go into, and still stay pan-Asian. And Singapore is one of those places.

IKIGUIDE: You once mentioned that localisation and local taste is very important on social media. In an interview, you gave the example of Facebook taking 5 years to succeed on social media, and LINE just taking one. So can you elaborate a little bit more about local tastes?
Steven:
I think fundamentally in the business of social, the success of the business is always related to the ambience or culture of society that the company is in.

The reality is that this is a big planet we are all living in. How we target our users’ circles or networks of friends, and how they think about their personal audiences, the style of their play and the way they form friendships, differ from countries to countries.

Facebook is very binary. For example, if I were to add you as a friend, we could have known each other pretty well pretty quickly. However, if you look at the Japanese model, it is a far more cautious society. So, a typical user would not tend to reveal everything at once, but rather would progressively share details over time. However, people do bond over games and stickers, and will share their lives with one another gradually.

Therefore, the platform has to take into account the subtleties and small details as to how people socialise, especially in the Japanese or Korean context. Even in Indonesia, India and The Phillipines—they are all different. There are different ways as in how friendships form online, how groups and networks are created.

This is why we believe that it is by observing and relishing these small differences that we can find opportunities for Migme to grow, and create a wider platform for more users to connect and engage with one another.

IKIGUIDE: Do you think that language is an issue for localization?
Steven:
The platform is Unicode, and in the meantime we do everything in multi-languages. Then we are going to use a social approach to skimming the app, and to go out and support many other languages inside of it.

We do support many different languages now, but would adopt a community-based approach to translation in the next quarter of this year.

IKIGUIDE:
Let’s move on to the hiring of staffs. What are some of the characteristics you look out for in identifying a good staff to hire?
Steven:
We hire a lot of people whom we think are the best in their countries. For example, the gentleman we have in India actually used to do strategy and digital portal in his own country.

We hire people who have an existing and wide network in their own countries, and we also hire a lot of younger people who tend to backpack and travel out more.

So we look out for curious people with the aptitude to learn and expand their networks in various countries they go to.

And yes, we hire a lot of backpackers who love travelling, getting out there and doing stuffs.

IKIGUIDE: Apart from Shopdeca, Andreas also founded Sportdeca. Is migme planning to acquire that too?
Steven:
We work with Sportdeca closely, and we want to expand into what they are doing to support social e-commerce and making that happen.

IKIGUIDE: In an interview with TechinAsia, you said, “Acquisitions helped give our users or audience more to do, and contributed to fueling organic growth. The beauty of having a platform business is you get ‘1+1 = 3’ effects the more we bring into the family.” How do you decide which company to acquire?
Steven:

We actually look at the DNA of the founder and we consider whether the company has a complementary fit to our company and our profile. Because ultimately, we are a social platform business.

Does acquisition provide more choice for things to play, or do these companies give us access to communities and content? Or do they provide the infrastructure for us to monetise products, or solve our monetisation challenges?

These are factors we consider before acquisition.

IKIGUIDE: On a parting note, do you have any words for aspiring entrepreneurs?
Steven:

Firstly, when people say that entrepreneurship is 1% inspiration and 99% perspiration, they are dramatically underestimating the amount of perspiration.

I’m sure we have all heard this quote before.

But I would say that if you are able to deal with uncertainty, and have a comfortable level of faith in yourself, then entrepreneurship is a worthwhile journey.

At the end of the day, you would be surprised at how entrepreneurs are not exactly risk-loving people. They are actually more risk-averse people than you think, but they believe that they can manage risks.

So it is not about “I love risks”, but the management of risk—there are a lot of entrepreneurs who spend a lot of time managing risks.

Imagine you are in a job—it is not without risk either. Companies rise and fall, come and go–whether you are in a job, or building your business, you may be subjected to the same amount of risks. So an entrepreneur could also be comparing the risk he/ she is taking, with the risk taken when he/she is working in a company.

So entrepreneurship does give you a chance to be accountable to your own abilities, to have a lot of experiences, to create a job that you would otherwise never have. So do remember that life is short, and do remember the quote about perspiration—usually the amount of perspiration is dramatically underestimated.