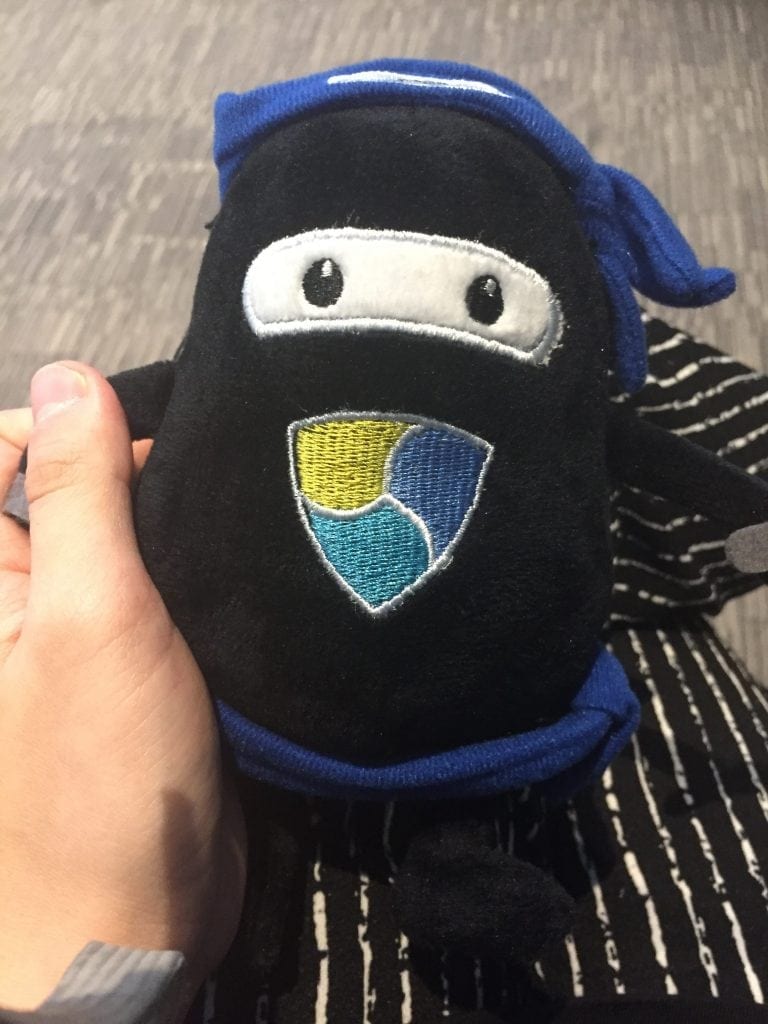 Today I had the privilege to represent IKIGUIDE to speak at the SkillsFuture Festival 2018, at Science Park. I really enjoyed myself!

In this post I will provide some updates about NEM, and write another post about the other speakers’ talks.

There were a lot of NEM folks represented in the seminar today AND it’s super inspiring! Prior to this festival, I already have some of their collectables (T-shirt, coin, notebook, pink NEM ninja)so I must say the NEM doll was one of the things that made my day.

Hehe. I got the pink one in Manila, from NEM Phillipines.

…and now I have the black one! haha. They look so cute together!

There were three NEM representatives who spoke today. Wilma gave a wallet demo, which was quite simple to follow. WE LOVE!

There were also three random NEM giveaways during Wilma’s sharing. What I loved most about Wilma’s sharing and demo is that we just require 10,000 NEM to do delegated harvesting! That’s pretty cool.

I also learnt about the “Proof of Importance”, which is a rather interesting consensus for a blockchain, since it correlates relevance to protocols.

The next talk was by William Tan, of NEM.

This talk was really interesting as William had extensive experience in HR. So, he started his talk with an introduction to the S curve.

So William shared about how it is important to always make sure the knowledge you have are practical and relevant to market needs. When “old” knowledge matures, we plateau and require new knowledge to start another S curve to reach greater heights and growth.

Pretty fitting for the theme of “skills future” and of course blockchain!

I’m always humbled by seniors with the never stop learning attitude, for instance. When I last gave a talk at NuMoney there was a bright old lady who attended (her name’s Sally), who inspired me greatly. I met her yesterday at Cryptoprofile’s talk as well!

Yay! I had the huge honour of representing IKIGUIDE for our first public outreach of 2018 today! 🥂 The topic was on discerning amongst legit, scam and shit coins. The 2-hours speaking experience was really fun—I was moved and humbled by a 80year old lady in the crowd. I hope I can be as tech-savvy as her when I’m her age! Everyone was so enthusiastic and I’m Super thankful! 果然是活到老学到老👏✨✨✨ #ikiguide #numoney #cryptocurrencysg #crypto #bitcoin #eth #ethereum #singapore #igsg #sgig #blockchain

I felt that William made a lot of good points about NEM and ecosystems. And his background in HR definitely added depth to his presentation, because I could sense his accumulated wisdom about human nature.

At IKIGUIDE we’re all about mass adoption to crypto, so it’s very heartening to see how the NEM protocol bridges people to technology. I couldn’t agree more with his point that developers can consider talking more to business owners, and vice versa.

I also really appreciated the panel discussion that came later! Even though I personally felt that the panel was too long, not robust enough and 100% male-dominated (hehe the blockchain discourse definitely does not benefit from 0% female representation), the information presented at the panel was pretty pleasant.

In particular, I really liked how Lance was really open and passionate with his sharing! He spoke about how blockchain can make air travel safer, for example. I was really impressed by how the Nem community was so passionate about projects in the ecosystem.

To be honest I’ve always felt happy in their community. People ARE passionate, and NEM is undeniably the no.#2 most popular blockchain in JAPAN! They must obviously be doing something right for such amazing mass adoption. Hearing NEM folks talk is like hearing the Stellar Lumens community talk–you could see how people are super enthusiastic about their mission!

We’re definitely monitoring this protocol at IKIGUIDE and definitely wish them all the best!!