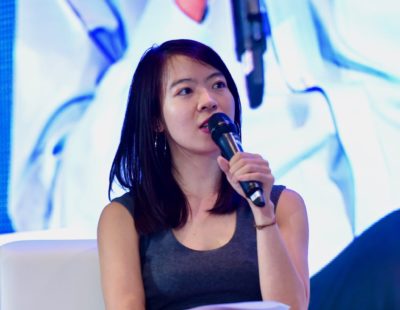 In her current role as Head of Asia Pacific for Infinity Blockchain Ventures, Nicole Nguyen is spearheading a regional initiative to connect major players and to foster the evolving blockchain ecosystem in Asia.

Her team has also launched Asia Blockchain Review – one of the leading media and community outreach platforms – which focuses on untapped stories and emerging markets in Southeast Asia/Asia and bridges the gap between the Asian ecosystem and other regions in the world.

Asia Blockchain Review is also a media partner of Next X Asia, an initiative which brings together major change-makers and influencers in the technology space. Next X Asia is also having its inaugural meetup in Singapore on the 21st of March 2019, titled “Building Next-Gen Ecosystems: Learnings from Japan and Singapore”. You may sign up for this meetup here.

We are very happy to have Nicole with us today– Enjoy the interview!

Wan Wei: Hello Nicole, thank you for accepting the interview with us today.

To make this interview more engaging for our readers, let’s start with something slightly polarising. Can you share with us about the greatest controversy you have ever heard regarding blockchain technology in your career thus far?

Nicole Nguyen: I think the most controversial subject revolves around the topic of decentralisation.

There has been a huge discourse about decentralisation and the discussion can get confusing at times. This is because the perception and interpretation of the term “decentralisation” may vary from one person to another.

One common topic is the question of whether we should even engage with the concept of decentralisation in all aspects of production or through all blockchain applications.

Fundamentally, what is missing from the debate is the discussion about the core value that blockchain technology brings.

Perhaps, any talk about decentralisation will inevitably involve more business-driven initiatives, such as solving a problem that no other technology has been able to solve. This is as opposed to trying to first develop the technology and then subsequently wondering what problems we are trying to solve through this blockchain technology.

On The Utility of Blockchain Technology For The Masses

Wan Wei: The notion that blockchain has solved certain problems that traditional technology cannot solve is an interesting one. Can you give us one example of it?

Nicole Nguyen: One key example we can see is how blockchain can bring the wealth of data to users. Our world has become complicated with so many layers, middlemen and intermediaries involved.

The power of blockchain is that it brings decentralization to the ownership of data. All of us can now own, control, utilize and access our personal data.

This is as opposed to the alternative of having to conform to the various rules of the service provider without actually knowing who sees or have access to the data.

This is one of the real areas where blockchain definitely can solve a real business problem that traditional technology cannot solve.

Wan Wei: In your view of how does one go about encouraging mass adoption of the crypto currencies?

Nicole Nguyen: That is an interesting question.

Honestly, I would say that crypto currencies is one of the earliest and the most sensitive application to blockchain technology. The mass adoption of cryptocurrency seems to be the gateway to blockchain adoption.

Having said that, a lot of people are bringing blockchain technology into their businesses because they actually know what kind of problems they are trying to solve.

It might be difficult to bring cryptocurrency to the masses unless people can get used to the various user onboarding processes. It is going to be very difficult to adopt other blockchain applications as well. This might be something to do with the ecosystem and at some point, this onboarding process has not reached the expected mass adoption that is going to impact the adoption of the full technology itself.

Therefore, I think we are trying to make the onboarding process smoother. In addition, given that the market crashed, one emergent and unexpected result might be more stability to the price of cryptocurrency. Against this context, the mass adoption of cryptocurrency is likely to happen more extensively and practically.

Wan Wei: What do you think is one barrier to the mainstream adoption of blockchain technology?

Nicole Nguyen: I agree with a lot of people that the greatest barrier to mainstream adoption of blockchain technology is raising awareness.

The interpretation of “mainstream adoption of blockchain” varies from one stakeholder to the other as different people have different perceptions about the technology, cryptocurrency and blockchain.

So we cannot have a one-size-fits-all solution for everyone and the mainstream adoption of blockchain technology is going to take some time. But I think each ecosystem is one we can build and nurture. Also, the response to and development of blockchain use cases is likely to change the big picture and drive more adoption to the technology.

On The Blockchain Industry

Wan Wei: Some reports have said that up to 90% of current blockchain companies will “die” within 3 years. What do do you think is the key to blockchain startups surviving?

Nicole Nguyen: The key to the survival of blockchain companies should be about the relevance of their solution to actual business problems.

The companies who survive are likely to be serious about their road maps and are practical about how to solve business problems. A lot of blockchain projects right now are still at the ideation stage. I think companies that would survive are the ones that can execute and deliver their product roadmap.

Having said that, it is likely that ecosystems would have some embedded schemes just to monitor the transactions. The securities can be executed through Escrow, and there are schemes from other stakeholders which will help blockchain startups execute their plans. We will see if the stronger companies survive in the next three years or in the near future.

Wan Wei: On a parting note, do you have anything else to add?

Nicole Nguyen: This blockchain space is an exciting place for me given that I can meet many people from different backgrounds and learn many things.

This space is designed in a manner that it is at the convergence of many different industries and many different layers of technology. Therefore, we can also learn a lot about many emerging technologies such as AI. So I think that the excitement of the technology is still there and it is a very fun and engaging place.

I would say the blockchain community is the most unique kind of community that I have been engaged with. Giving that it is still a young industry, people will not be judged by age or– ‘based on experiences’. In addition, people will not be discriminated that much based on their perspectives, gender, backgrounds and so on. I would say that the blockchain industry gives people a good and fair foundation to start and to expedite their careers and businesses.

So it all boils down to whether you commit to the technology or not. I think everyone stands a chance to get something out of it. And this is what I love most about the technology.

Wan Wei: Thank you for your time today, Nicole! 🙂

Asia Blockchain Review is the media partner of Next X Asia. Tickets are running out fast–Get your ticket NOW for Next X Asia’s inaugural meet-up on 21st of March in Singapore!