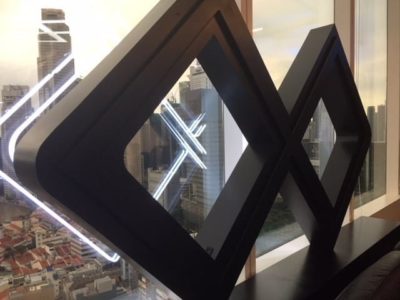 Out of pure curiosity, I went to TenX 2018 meetup yesterday.

It was a great information and networking session with a lot of developers–not to mention with yummy pizza– so I wanted to blog some of my thoughts about the session.

Like my Stellar Lumens in Singapore reflections post, this post is not meant to be an “expert” sort of post–you’ll probably see lots of potentially “silly” questions, thoughts and comments. This post IS a personal opinion. I showed up yesterday because I have heard of TenX before and did not know what the company is all about–so I felt really curious and wanted to learn more.

I do PR for companies doing ICOs in Singapore, and while I can represent, strategize and sell well, I do recognise that there are gaps in my tech knowledge. I’m constantly seeking to improve and upgrade myself, and please do be patient with me! 🙂

For a quick overview of TenX, watch the above video.

Basically TenX is a cryptocurrency payment platform that comprises of an entire ecosystem of an online wallet, a physical debit card (which is totally cool), a bank account, full ATM access.

You may think of TenX as a company that wants to introduce products that makes it easier for the masses to use their cryptocurrencies offline–anytime, anywhere.

Which is totally cool lah! Imagine being able to convert your bitcoin to buy anything you want. Shitty Xfers is still not replying to my bank withdrawal queries–so I would love to have this card!

The new TenX office is really cool, really beautiful, and has this view from Level 24:

So from the outside you can see this lighted logo really beautifully too, right when you are crossing the road to proceed the central:

How cool is this?!

Without further ado, here’s the TenX 2018 roadmap according to Dr. Julian Hosp

Julian says that TenX currently has close to 200,000 users prior to Jan 8, 2018. They had been working with the card-issuer WaveCrest, when WaveCrest lost their Visa license and had to cancel all of the cards they have issued.

So Julian shared his personal experience on what happened when his news first broke. He said his co-founder sent him like close to 10+ messages and a lot of people sent him messages as well, so he too was wondering what happened.

Julian then reiterated that in spite of the huge hassle of having to recall the cards, this could be a huge opportunity for TenX because all other cryptocurrencies which was using WaveCrest has lost their cards.

Julian felt that that the TenX team has been working really hard to get their new issuer live, to lay great groundwork, and make things happen. He also stressed the point that at this rate that they are going–meetings with the issuer and all– they are probably going to be the only company live with a card eventually.

They are also currently working with a new card issuer, and have to currently keep the new issuer’s identity secret because nitty gritties are being worked out.

So the update is that in 2018, there would be more features added to the TenX token. The TenX PAY token was originally set up to be a loyalty token, that is to say, the more you use the token to pay, you will be rewarded with additional PAY tokens. It’s something like a cash-back function

Some of the additional features would be added step-by-step:

Then Julian went to talk about the difficulties in implementing some of these features, especially in the European Union.

For example, TenX has to avoid sending things (“airdropping) to people they don’t know, because it is considered a potentially suspicious activity in the eyes of EU authorities.

That’s why they had to do extensive KYC in EU during their ICOs.

In addition, especially in the USA, there is something called the Howey’s Test, which is a test created by the Supreme Court for determining whether certain transactions qualify as “investment contracts.”

In general, the ideology behind the Howey’s Test is that “If you didn’t work for/ earn your returns, then the tool by which you are getting the gains from is considered a security”. And by law, all securities should be regulated by (centralised) institutions.

So yes, this comes up as an additional challenge towards the adoption of TenX PAY system.

Frankly I have no idea what Julian is talking about here–he drew a really complicated diagram on the white board. This is basically due to my lack of knowledge.

So I went to google what COMIT is, and got this:

“Essentially, it’s a payment platform that “can provide the same final and elegant solution as the internet did for information”. It promises to provide frictionless, cheap payments for users all over the world, including true global access without limitations to any asset or business process connected to the blockchain.”

What I got from the update is that the developers are experimenting with the COMIT network, and Julian urges the audience to be patient with developers.

So the conclusion in relation to the COMIT network is– “be patient”.

TenX is planning for the banking license around the Q2 of 2018.

Once they get the license, it will allow them to control the entire user experience. The general idea is that in order to issue cards, they will need to have a banking license.

The challenges once again is that in order to have the banking license, TenX will need to have regulators, institutions, banks, business partners etc on their side. So this sort of relationship building once again takes time.

So one good point about this direction is that if it succeeds, TenX will then be completely independent of any third party as they can issue cards directly.

Quite an exciting phenomenon to watch!

To be absolutely honest, TenX does feel a bit cultish to me.

Everywhere in the office you can see prominent logos/symbols of TenX, right up to the ceiling. And this is highly subliminal and powerful.  I even saw a TenX logo at the back of a huge fan’s personal laptop yesterday.

I mean, if I had bought TenX and its price rose on exchange, I would probably also buy a necklace with TenX symbol lololol!~

The TenX logo is cool. I really like it. It also reminds me of this Poppy video:

This “cultish” feeling is probably is a great thing because it signals great marketing and branding. Afterall, Apple Inc is known as a great cult too! In addition, I had found the co-founder Julian convincing.

If I had known about TenX PAY Token earlier it might be possible that I will put some of my money into it, because I love the idea and vision of making cryptocurrencies spendable anytime, anywhere.

They even have their own official merchandises! (I like this TenX tote bag by the way haha–it’s so cute!)

From the perspective of a person who doesn’t hold TenX PAY token and is open to holding TenX PAY token in Q3 2018, I feel that the tough situation now might be as a result of TenX making certain promises way back in 2017 that can be really hard to keep.

I do want the TenX card though.

Note that there is an important difference between “making promises that are hard to keep” vs “intentionally making promises to scam”. These “unmet” promises can be summarised in the following reddit comment:

To be fair to the TenX team, the screwed-up timeline might largely be due to unknown-unknowns. There can be a lot of legal restrictions when it comes to mixing cryptocurrencies (decentralised) with legal tender (centralised)–and this is made even more complicated when we are talking about different legal jurisdictions.

Personally I would give the founders the benefit of the doubt at this point–so if I had gotten TenX PAY token I would HODL and keep my trust in the team. They don’t seem to be “scammers”, as some might freely accuse–in my personal opinion, they simply need more time.

I personally also think that the founders might be quite sick of listening to people calling them a scam on reddit or on other social media portals.

But of course I’m saying this without holding any TenX cards or PAY token–so to pissed off holders I can see where you are coming from too.

Anyway, I really hope the TenX team popularised the TenX card–when a more accessible and convenient version is out I would totally want it!

Well, that’s all for my reflections after the TenX talk yesterday! Let me know what you think! Leave a comment–I would personally read them all 🙂