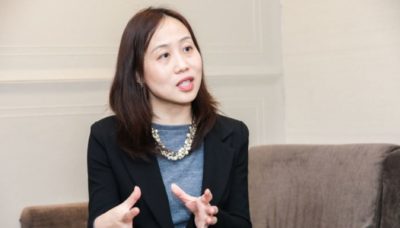 We’re excited to have Dr Xie Yinglian, CEO and co-founder of DataVisor, with us today.

Soh Wan Wei:  Hello Dr Xie, thank you for your time today. Could you tell us more about yourself and what you’re currently doing?

Dr. Xie Yinglian:  I am the CEO and Co-founder of DataVisor. I received my Ph.D. from Carnegie Mellon University’s computer science department. My thesis was on network security and doing large scale detection and forensic analysis. After completing my degree, I joined Microsoft Research in Silicon Valley, and I started moving into application levels of all kinds, working on preventing fraud and abuse, and other malicious actions impacting consumer-facing groups. All told, I have been working on fraud abuse detection for over a decade now.

At the end of 2013, my co-founder Fang Yu and I decided to try something really groundbreaking. After seeing a lot of different kinds of fraud and abuse issues across different industries, we committed to building a more generic technology that could be applied widely.

Dr Xie Yinglian On Fraud Detection in a Digital World

Soh Wan Wei: As you mentioned, you’ve been working on fraud abuse detection for a long time; what is your motivation for working on this topic, and what keeps you excited?

Dr Xie Yinglian: Fraud is a huge and ongoing problem; even more so today in the digital era than it was in the past.  The move from offline to online, with everyone and everything now connected, has made our lives more convenient—we can do things faster, easier, and more efficiently. However, life is more convenient for hackers and attackers as well. Plus, they don’t follow the rules. So, it’s essential that we have the right tools to defeat them.

When we talk about fraud, we are generally referring to a variety of malicious activities; from the installation side to abuse, and from payment fraud to application fraud. It’s important to understand that, despite people sometimes feeling safe on the internet because of the perception of anonymity, there are actually a lot of bad things that can happen.

For myself, I’ve always felt that fraud is kind of a game of cat and mouse, and the problem is that we’ve historically been lagging behind the bad actors, trying to come up with solutions to solve the problems they’ve already caused. At DataVisor, we are changing that, by creating a way to defeat fraud before the damage happens.

Dr. Xie Yinglian: Right now, most organisations take a kind of ‘whack-a-mole’ approach to the solution. What I mean by that is, when we have new functions or features that expose a vulnerability, this can lead to the emergence of a new kind of fraud. When we see this new fraud, the approach is usually to put out a new patch, which in turn may lead to new vulnerabilities. This is what I mean by whack-a-mole approach. New problems keep appearing, and we just keep trying to deal with them after the fact.

This approach doesn’t work, however, because whenever we see an attack, the label the attackers use will change by the time we react and create a solution. This means that we are always being reactive.

So, when I came into the industry, I wanted to see if I could apply my research background to create a solution that would address the challenges at a more fundamental level, instead of relying on this whack-a-mole approach.

For example, when we are looking at vast amounts of user accounts and activities, can we look at that and we have a generic solution to deal with it all? Can we treat the virus instead of treating the symptoms?

At DataVisor, we are very passionate about creating a proactive solution, instead of just being reactive. How do we stay ahead of the attackers? We don’t want to fix the damage; we want to prevent it. No matter how they change, how they try and obfuscate their actions, how they use new techniques to make themselves seem legitimate, we want to catch fraudsters in real time, before their attacks succeed.

Soh Wan Wei:  Many people seem to misunderstand what Artificial Intelligence means. Not so much because of ignorance but because of the misuse of the term by so many companies. How would you personally define AI and machine learning?

Dr. Xie Yinglian:  I agree there is a great deal of confusion around this topic. Part of the problem is that there are different definitions and different interpretations. One way to think about AI is to think of it as referring to machines being able to automatically do tasks that humans would otherwise have to do manually. That’s a very broad definition. A more specific vision of AI might focus not just on automation, but the concept of “learning”; the idea of a machine having the ability to adapt and change without receiving specific instructions from a human.

So the terms “artificial intelligence” and “machine learning” really can mean many different things, which is probably why there is so much confusion. To really understand, you have to talk about how they’re being applied. For DataVisor, these techniques and technologies are critical to the success of our fraud management solutions. It’s why our clients are able to be proactive against fraud.

Soh Wan Wei:  So you think that Artificial Intelligence has a role to play in developing these new techniques and in improving fraud detection and prevention?

Dr. Xie Yinglian:  AI definitely has a significant role to play. We have so much data today, and the scale of online fraud is massive. With the global population being so large, any time a new online service experiences success, there are suddenly thousands to millions of new users of a new platform. That means more data and the possibility of even more fraud. Plus, growth is often so fast. Fraud really flourishes on these new platforms, because they grow so fast, and add so many users, and it’s just too much data to sift through to try and determine what is and isn’t fraudulent.

Think about banks, for example. In the past, banks had local branches serving local people. It was so much easier to keep track of customers, and their actions and assets. However, today, banks are global. They serve people all over the world, and it all happens online. It is literally impossible to have a manual solution for keeping everything safe and free from fraud and abuse. So this is why AI is playing such a key role. We need tools and techniques that extend our capabilities and make it possible to manage this kind of scale. Artificial intelligence builds on human intelligence to make us powerful enough to sift through all the data and make determinations we couldn’t do manually.

Soh Wan Wei:  With your extensive experience with AI and fighting fraud in the digital world, what is the biggest myth you have heard about AI in your career?

Dr. Xie Yinglian:  The question I get asked a lot by different people today is whether AI will replace humans to the degree that humans become redundant. I think that idea is definitely a myth.

In the area of big data, and in the online world, there are definitely tasks that machine learning can do that humans cannot do as well. It is like when the first computer came about, the speed of calculation was faster than what a human could do. So with the amount of data we have today, to make sense of it all is already beyond what we could efficiently do with our manual capabilities. So we create these technologies so that we can successfully do what we can’t do manually. However, because we rely on these tools, does that mean we are all going to lose our jobs? No, I don’t think so. New jobs are going to emerge, other jobs are going to change, and some jobs probably will go away. But I think things are just going to get more interesting, and there is a role for everyone to help build this new future.

We haven’t even gotten very far yet, and we don’t know what AI is going to look like five, ten, or a hundred years from now. We have only just scratched the surface of what machine learning can do for us, and what we can do with machine learning. But there’s no question that humans are driving innovation, and that the goal is always to improve.

Soh Wan Wei:  Thank you for your insights. On a parting note, do you have anything else to add?

Dr. Xie Yinglian:  Yes. I’m really looking forward to Money 2020. It is a great conference. I am glad that it is taking place in Singapore, and that it is bringing in people from all over the world.

I look forward to meeting with large financial institutions to discuss new AI-powered fraud solutions. Hopefully, there will be many more such conferences in this region, and those conferences will continue to focus even more on AI and machine learning.  I am looking forward to this!

Soh Wan Wei:  Thank you so much for your time.

0Shares
AI x Blockchaindatavisordr xie yinglianxie yinglian
Previous Post[Upcoming Summit] Why You Should Not Miss Chain PlusNext PostWhat’s the Future of Work With Blockchain and AI? Interview With Lim Wee-Kiat